Enter both hex numbers in hexadecimal calculator and hit the Calculate button.

The hexadecimal calculator performs algebraic operations on the hex numbers. It can perform the basic 4 operations including addition, subtraction, multiplication, and division.

It will give the answer in the hexadecimal number system. You will find all of the mathematical operations performed on the decimal form of the entered hex numbers.

What are hexadecimal numbers?

Hexadecimal is a number system similar to decimal, binary, and octal number systems. It uses base sixteen (16). The sixteen hex digits include numerals from 0 to 9 and alphabets from A to F.

The letter A stands for 10, B for 11, C for 12 so on. This number system is used in the different fields of computer. The main purpose of this system is that it compresses binary numbers to save space for better working.

Algebraic operations on the hex numbers

The operations are performed as in the decimal number system. The difference comes where the conversions are involved.

In the article below, we will go through each operation one by one. But before jumping on to the operations, let’s give a brief glance at the conversion of decimal to hex and hex to decimal.

Keep doing this process until the quotient itself becomes smaller than 16. Let’s see an example.

Write the digits from bottom to top as 4E816. Use the decimal to hex converter instead.

Note: The digit numbers started from 0 because for the backward conversion, you have to raise these numbers as powers. Powers in such conversions start from 0. See the next heading.

Converting from hex to decimal

Find the decimal value of DEF.

Step 2: Raise these values as powers and multiply with the digits.

Now, it is time to dive into the arithmetic operations. Try hex to decimal converter.

How to add hex numbers?

Change the alphabets to their decimal equivalents and add the hex numbers. But before writing them, you have to change them into hex as the addition was in decimal numbers.

How to subtract hex numbers?

It is also similar to the hex addition. But you have to be careful in borrowing numbers. In hex subtraction, when you borrow 1 from the preceding number, you add 16 into the current number. Because 16 hex is equal to 10 decimal.

How to multiply hex numbers?

It is quite difficult to perform multiplication on hexadecimal numbers. Every time a row is multiplied by a digit, conversions will be done as well as at the last during addition. 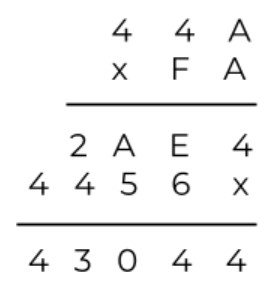 How to divide hex numbers?

For hex numbers, it is better to make a multiplication table of divisors and then use those values to perform long division.

The example below is of hex numbers. In the end, only E is left. According to the multiplication table we made, use E.