GCF - Greatest common factor can be calculated by any of the following methods,

How to Calculate HCF? In the above picture, the greatest common factor of 12 and 16 is found through the factorization method. Firstly, all the factors of both the numbers are written and the largest number is considered as HCF. 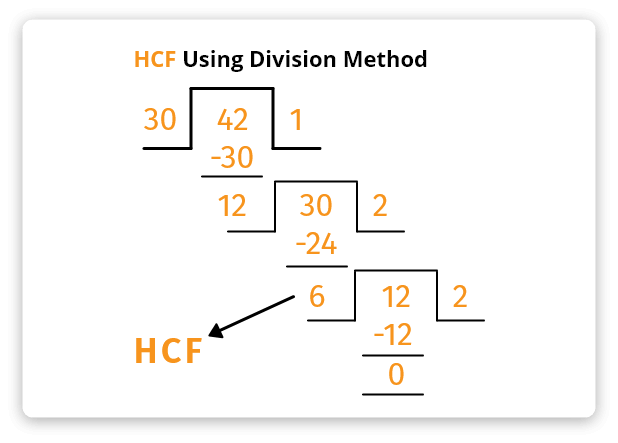 This is another method of finding the greatest common factor of 30 and 42. Firstly, you have to divide the largest number by the smallest number in the first step. In simple steps, you can use the Factor Tree method to find the greatest common factor of 24 and 36 as shown in the above picture.

You can find the HCF of two given numbers using this GCF calculator, or divide the largest by the small number, then divide the dividend by the remainder. Repeat this until the remainder is 0. The last dividend is the HCF of the two numbers.
Least Common Factor(LCF) can be calculated by the following method,

Calculate the HCF (GCF or GCD) and LCM for the given set of numbers.

So 18 is the GCD (Greatest Common Divisor) of the numbers.

So 360 is the LCM (Least Common Multiple) of the numbers.